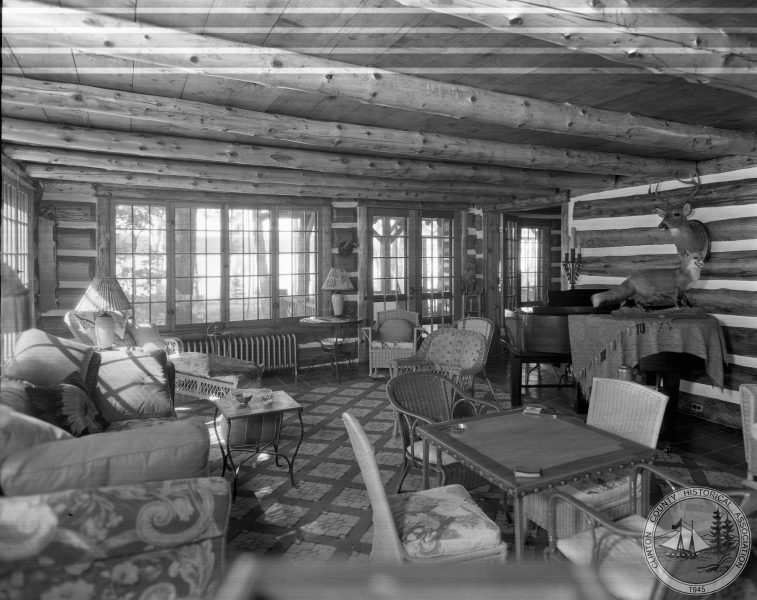 Not a Great Camp but certainly a very good one

By Roger Black
Among the thousands of photographic negatives in the Clinton County Historical Association Archives there is a one group of 41 images of a luxurious “camp” somewhere in the region. It doesn’t meet the criteria for being a Great Camp but, based on the photos, it certainly has to be considered a very luxurious camp.

Where it is, or was, located is a complete mystery. Several experts have been consulted and apparently no one has a clue. It probably comes from a collection acquired from a professional photographer in Plattsburgh although that hasn’t been, and probably never will be, confirmed. 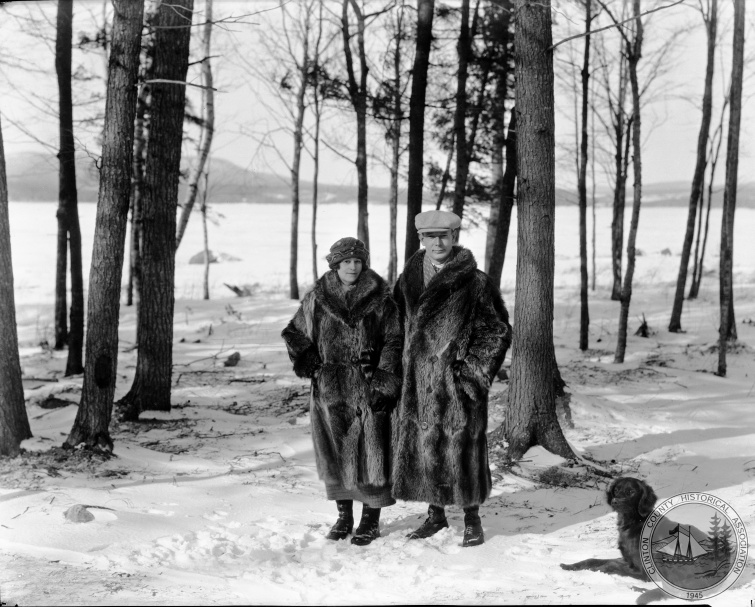 The collection of negatives includes one of two adults along with their dog. Are they the owners? It seems likely they are. Based on the fashion of the coats they are wearing, the era would appear to be the 1920s.

The camp itself seems to be newly built. The main lodge looks new and pristine while the lot on which it stands shows little wear as from over time.

Many of the photos are of the interior of the camp’s main building and they reveal a very luxurious setting. We see fine furniture, a tile floor in some rooms covered with large rugs in places, wicker chairs and plush sofas, well lit with many windows as well as electric lighting, several large stone fireplaces upstairs and down, indoor radiator heating, and even a baby grand piano.

As might be expected, the walls and furniture tops are adorned with stuffed animals. In one photo we see a mounted fox atop the piano and in another the piano has a mounted owl perched on it. Elsewhere there is a deer head, a moose head, a woodcock and other birds, a fish and a bear skin on the floor.

We don’t see any photos of a kitchen. It may be that the owners only wanted to show off their luxurious home and simply skipped the kitchen. When the photos are carefully examined, there is one area on the first floor that has been left out of the photos, a space next to the dining room and across from the main sitting room which could be for a kitchen area. The main sitting also contains a fireplace and stairway to the second floor and its master suite.

Outside, we see how large the main building is at two stories with porches on two sides. It is a log home with exposed beams in the interior. It should be noted that the photos had to have been taken at two different times since the ground is covered by a snowfall in some photos and bare in other photos. Plus, in some photos there is a dock on the water in front of the camp with a canoe tied up, hardly a winter scene.

Unless someone recognizes the main building or one of the outlier buildings, assuming they still exist, we may never know the camp’s location. The only other clue might be drawn from the view of the body of water and the mountains in the background. Sadly, the location and identity of the camp may always be a mystery.

If you think you can shed some light on the location or identity of this camp, please send your comments to the Clinton County Historical Association on this form.